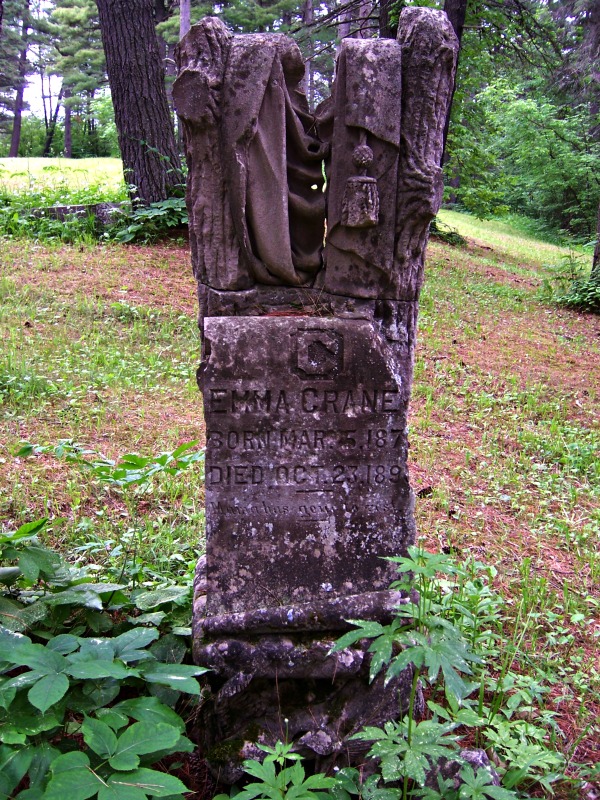 It may seem a strange hobby for an amateur photographer like me but my favorite places to take photos are old cemeteries. To find the older cemeteries in northeastern Minnesota and northwestern Wisconsin, I begin by looking up data on cemeteries at sites like The US Gen Web Project or findagrave.com . Then I get directions and set out to find them.

I like older cemeteries because the gravestones can be rather unique. Each one tells a story or leaves a mystery. For instance, my visit to Woodlawn Cemetery in the township of Parkland, Wisconsin, was very interesting to me and to my youngest teen daughter who accompanied me.

This cemetery was operational for one hundred years. The earliest marked grave seems to be that of Edward Dolby Anderson who was born February 24, 1872, and died March 19, 1872. The last burial took place in 1973.

The cemetery is not easy to find. You must park at the end of a dead end road and walk up a small hill overgrown with shrubs and weeds to get to it. The markers stand among several very tall trees. Some of the stones are in better condition than others. Some are hidden in the weedy fringe surrounding the clearing.

One of the most ornate headstones is that of Emma Crane who died when she was 29 years old (See the opening photo). The inscription lists her birthdate as March 5, 1870. She died on October 23, 1899. At the bottom of her stone is the simple sentence 'Mama has gone to rest.' She left a family behind yet no other person with the last name of Crane is buried at Woodlawn. Why?

A sad little marker toward the back of the cemetery stood alone and drew my attention. Two names are written on it: Florance Armstrong who lived and died in 1902 and what I assume must have been her older sister Katie M. Armstrong who died at 8 years of age and lived from 1895 to 1903. I wonder how the parents were able to endure the grief of losing two daughters within two years of each other. 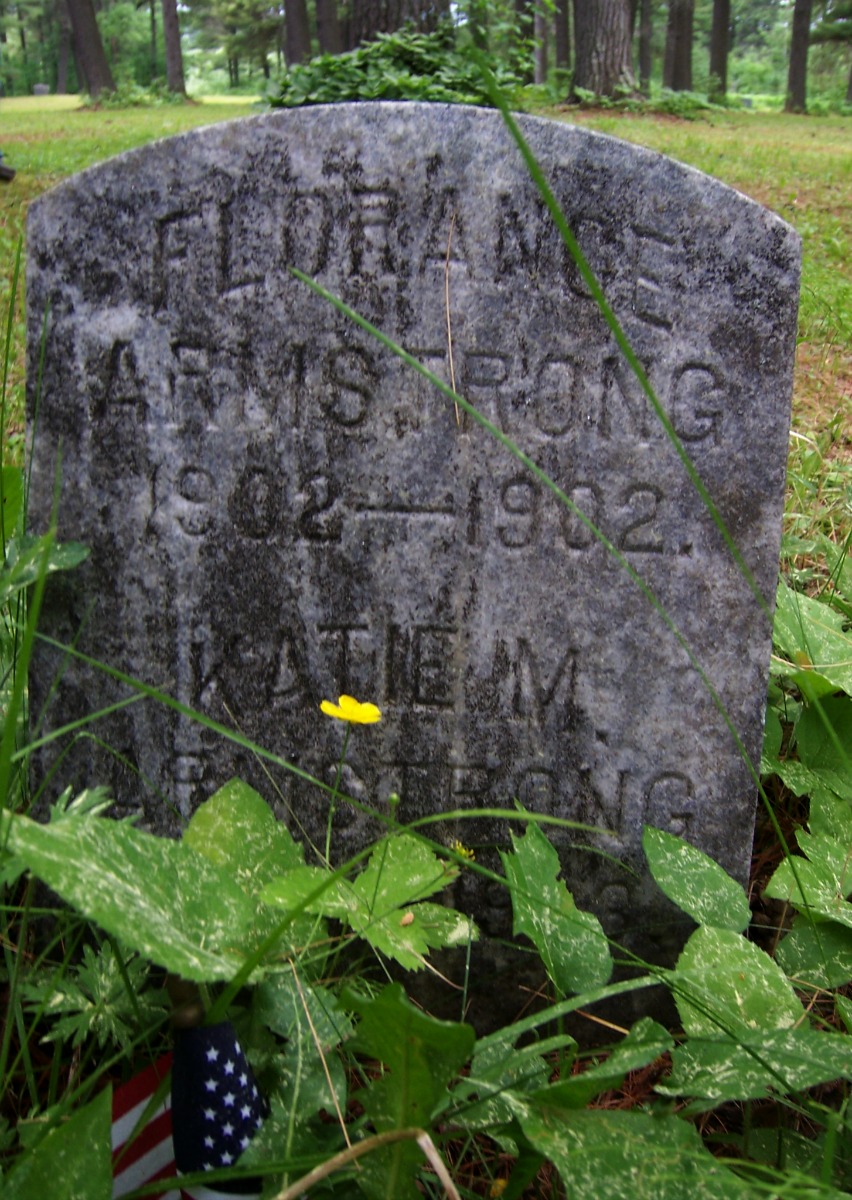 Another child, Jennie Beatrice Christenson, was born in 1904 and died in 1905. She must have been very much loved. Her marker has a poem on it:

"We had a little treasure once
She was our joy and pride
We loved her ah perhaps too well
For soon she slept and died." 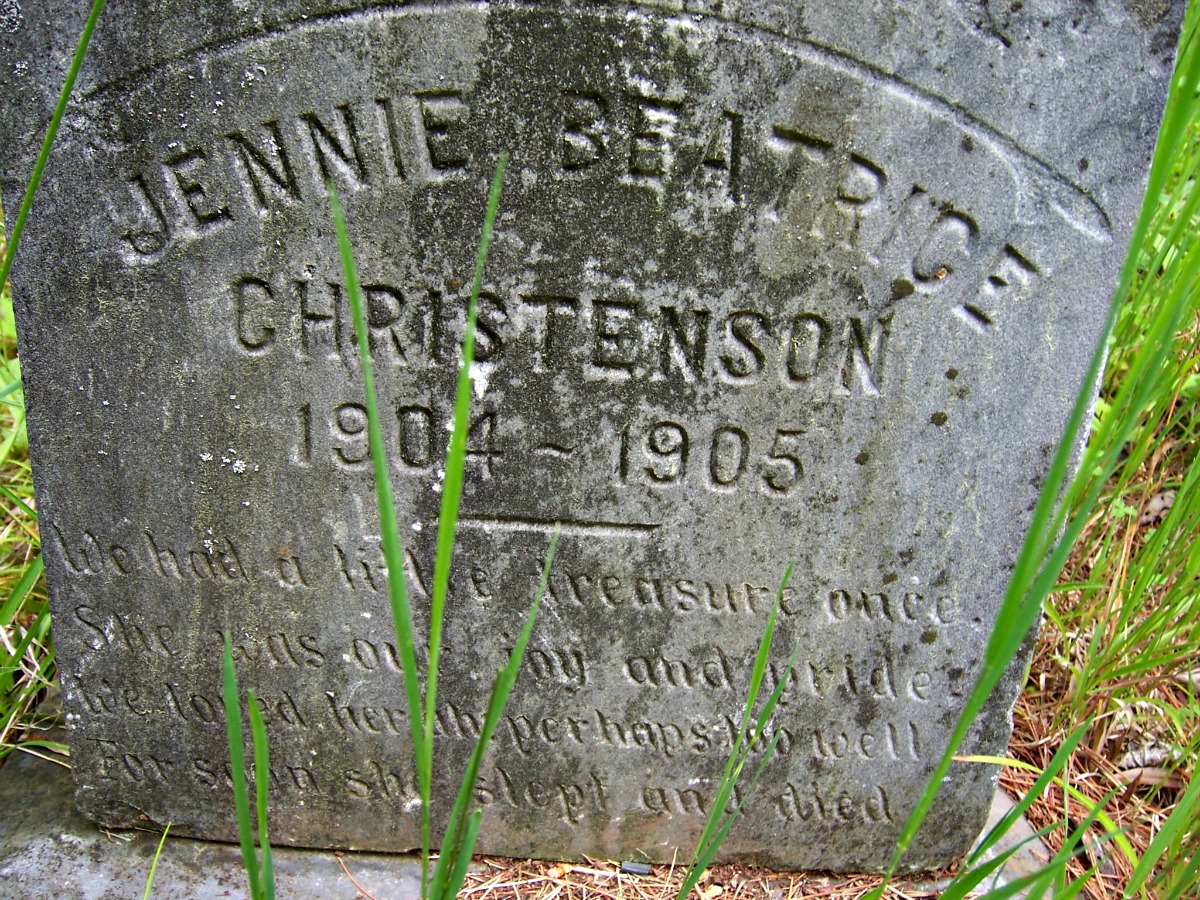 One of the most forlorn of the markers is that of Bernard Berg. The headstone on his grave is not even stone but metal. Years of hostile weather and possibly vandals have not been kind to the marker. It is riddled with holes of several different sizes. His date of birth is not listed but from the words on the marker we know he died on February 21, 1900, at the age of 42 years. The symbol near the top of the marker is that of the Modern Woodmen of America. The 'W' would have been where the hole is. Other parts of the symbol include an axe, a wedge and a beetle. The MWA was a secular fraternal organization which had started in Iowa in 1883. Its purpose was to provide for the widows and children of its members who died and to engage its members in community service work. 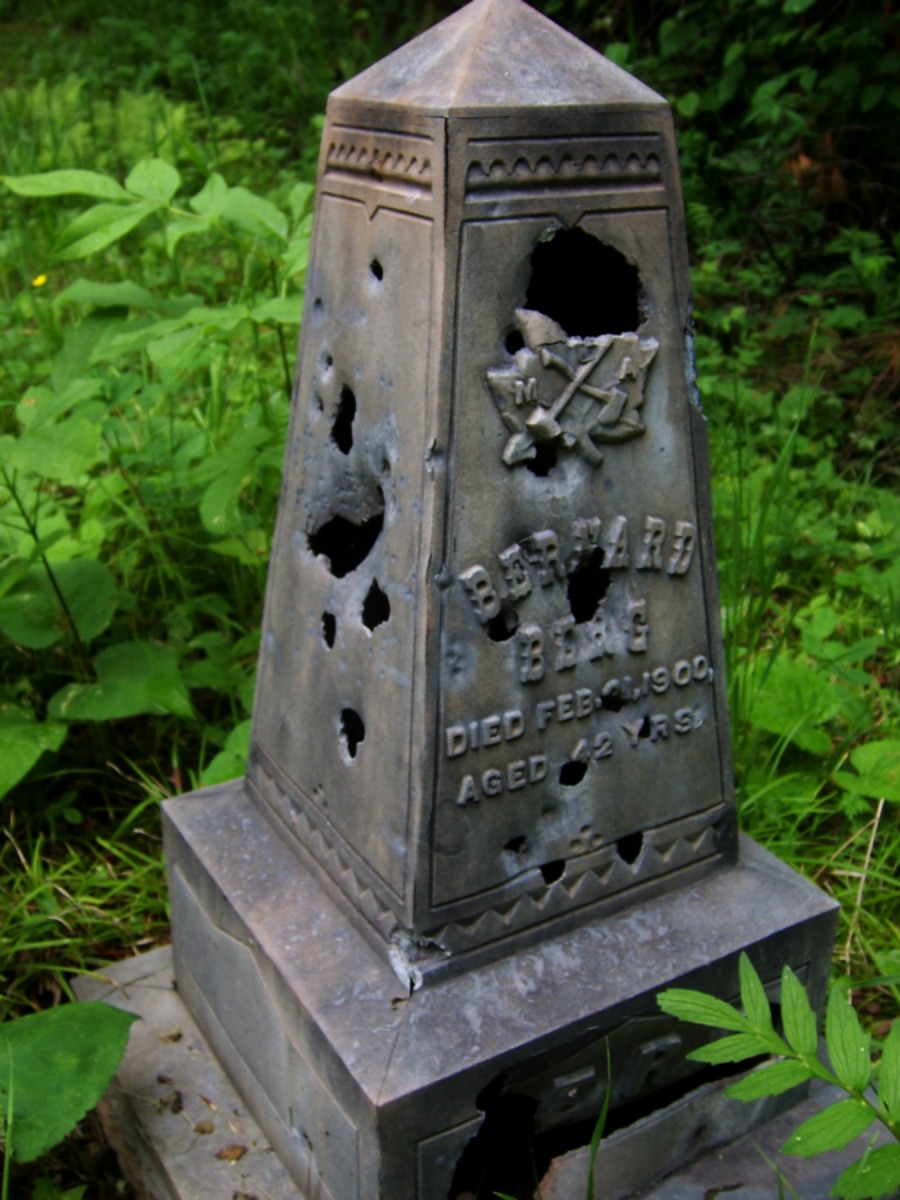 Most of those buried in Woodlawn Cemetery seem to have died in the late 1800s and early 1900s. According to the cemetery transcription found on the US Gen Web Project site, many of the deaths were in 1898-1900. It could have been from an epidemic like the diptheria epidemic of previous years or more likely from the harshness of life in the late nineteenth and early twentieth centuries.

I may never know.

The headstones from times past sometimes tell such a story, don't they? I used to walk through a very old cemetery on my way home from church as a teenager. Sometimes I would find myself in tears over children's burial markers or even just broken, ruined headstones. Thanks for sharing your finds with us.

When I was living in Los Angeles, I had a friend who liked to visit me from time to time from out of state, and she liked exploring L.A.'s cemeteries for famous people. Most people who live there never take the time to visit most of the cemeteries, but some of them are really interesting. If you're ever out there, I'd recommend two of L.A.'s more legendary final resting places, the Hollywood Forever cemetery, and Westwood Memorial Park.

I loved your article. I think visiting and taking pics at cemeteries is fascinating. The tombstones do really tell a story. We have a historical cemetery here. I am not sure how often they do this. But, they have people dressed in historical costumes that represent the dead person. They then stand by the tombstone and when you walk by they will tell you the story of the person they represent. This cemetery is supposed to be extremely haunted; but, then again, aren't they all.

It's not at all strange--cemeteries are super cool!

I always feel sad when the government decides to exhume the old cemetery in my country, Singapore.