Crock Pot to the Rescue: Making the Most of a Pork Roast 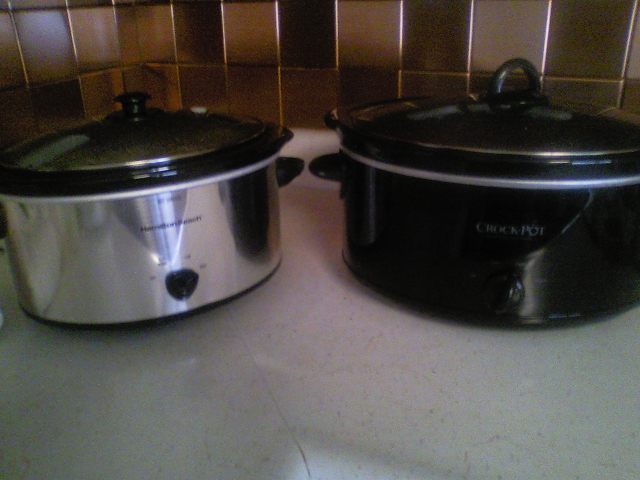 I don't cook all my meals in the crock pot, but I do use my slow cooker for many different dishes. The crock pot is economical in that it uses a lot less power than heating up the oven or using multiple pots and pans on the stove top. I also like that I can put all of the ingredients for one dish in in the morning and the slow cooker will do the rest of the work for me while I go about my daily business.

Like most people, I am struggling to get the most value and nutrition from the food I eat. Prices at the grocer's continue to edge ever higher, with meat being the largest single expense. I do all that I can to stretch my food dollars and my food as far as I'm able.

I had a four-pound sirloin pork roast that I initially cooked in the crock pot after browning in the skillet. I slow roasted the pork along with two pounds of baby carrots. It made a rich broth that I also saved.

Meal four : In the freezer for a repeat of the pork and noodles at a later date.

Not bad for two people and four pounds of meat!

How Do You Show Team Spirit?

Not bad at all. I have had a crock pot (slow cooker) for about 10 years now and once I had one, I couldn't understand why I had never known about them previously! It took a male colleague to tell me about them and how his wife and their 6 children found the slow cooker so useful, producing tasty, nutritious meals with the cheaper cuts of meat.

Oh yeah. Those things are just wonderful for a nice, tender roast.

I enjoy using my crock pot year round, but it really gets a workout in the cooler months of the year. I am thinking it is time for homemade chili. Do you use yours for more than main dishes?

I know I've only scratched the surface as to what can successfully be made in the crock pot. I've found a recipe for bread to be made in the slow cooker and some yummy looking desserts too. I'll have to let you know how they turn out.

That sounds like a great way to make meat go further.

Well done! One roast giving you four meals is a great deal, and it's a testament to your frugality :)

Great job on the meal stretching. I try to use my crock pot whenever possible. I have even taken to making crock pot meals ahead of time and storing them in the freezer so I have meals ahead of time. I have to stock up on my ingredients as I have used up all my crock pot meals so that will be the next grocery shop as this one is becoming all about Halloween and stocking up on a few things that I have run out of.