How Do You Show Team Spirit? 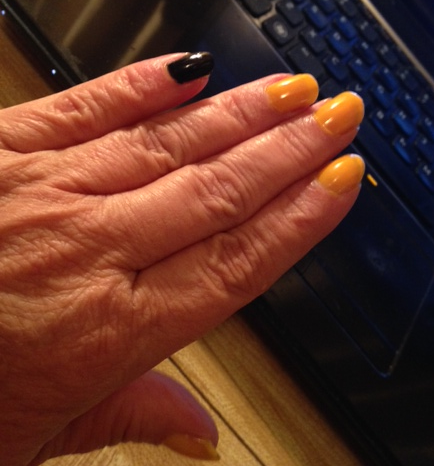 Last week signaled the official start of the NFL season. I was more than ready for it to begin. All the talk, the speculation since the draft in the spring had me revved up and ready to root my teams on to victory -- or at least great play.

It was a tough call for me as to which team to support on the first football Sunday, but in the end I chose to support the Pittsburgh Steelers. Now how was I going to show some team spirit?

Face painting seemed a bit too much. I did consider painting the team's colors in my hair, but if I had trouble washing out the paint, I'd look pretty silly. Then it dawned on me -- I could simply use fingernail polish in the team's colors.

It was fun to do something a little different and show my team spirit in a small but obvious way.

Do you do anything to show support for the team(s) you support? Fly a flag or wear a jersey?

I've Got Nothing to Say

Crock Pot to the Rescue: Making the Most of a Pork Roast

Mainly I shout at the TV and swear at the referee!

I take the oatmeal approach. :)
http://theoatmeal.com/pl/working_home/piggers

But, others feel the same about my interests, too.

I don't support ANY teams, would rather play the sport than watch.

I don't follow any sport except occasionally Formula One motor racing or motorcycle racing but when I am abroad I have been known to wear a Scotland T-shirt.

Sports is not my cup of tea but tea is (lol)

I wear a jersey and get drunk with the expensive beer that they sell at the games! LOL!

I don't watch football. I show my spirit by complaining about how all the football on TV is crowding out the number of baseball games on TV (I don't live in a major sports market area), which reduces the chance that i might be able to find a broadcast of a Dodger game.

Of course, if the question extends to all sports, I show my spirit for the Dodgers by clicking "like" on their Facebook posts that report the score of the latest game they won, and I sometimes post a picture of the Dodgers' winning score on the Facebook page of a good friend of mine who likes the Giants, lol. Go Dodger Blue!

Hello, well I don't watch NFL, but I do watch rugby and cricket. First of all I'm a strong supporter of the Springbok team (rugby) I have the green and gold jersey out and hanging over the couch and screaming my lungs out for my team. But I unfortunately don't paint my face green and gold. Maybe I should the next time the Springboks play a game. Hehehe!

I have not watched sports in quite sometime so I am not sure how I would support my favourite team. I used to just cheer loud but I don't think that would work well as the TV can't hear me too well lol