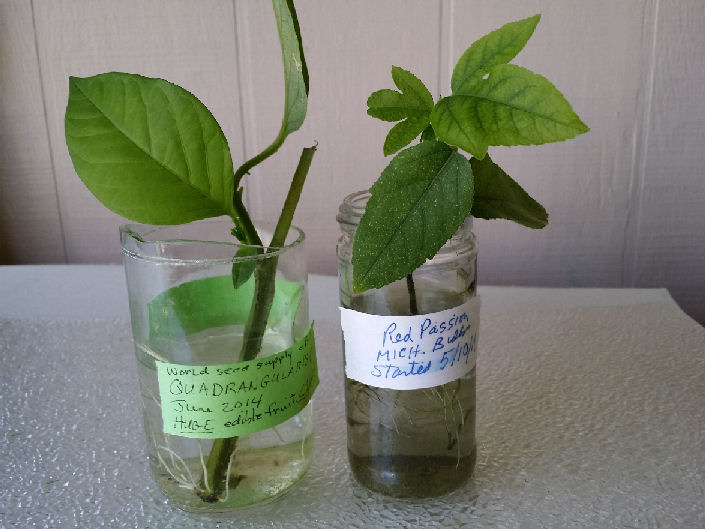 The first three things I like about growing plants in water are really the same as the three most important things to know about real estate: location, location, and location. But I will start with another advantage and then try not to be redundant:

ONE: The number one reason I love hydroponic plants is that you don't have to take care of them. Don't get me wrong, I love to take care of them, but I am usually busy doing something else and so I often don't. Take last week, for example. I put all my plants in the bathtub, hung an LED light panel over them, turned it on and went away for a week. Yes, I took the Amtrak Coast Starlight run up to Washington DC and looked at other people's gardens. Yes, the gardens of other people who plant things in dirt, that is one of the things I went up to see, along with all the millions of trees lining both sides of the railroad tracks. It was awesome. But what about my plants at home. Guess what? They were great. They were all alive when I got back, and no weeds, no bugs, but that is another story.

TWO: OK, let's talk about location. I like my plants at eye level, not down on the ground. I like them to be portable so I can take them with me on trips (not on the train, OK?) and I like to move them onto the dinner table when they are flowering or into the kitchen if they are herbs and I plan to use them while cooking. Plants are my pets. I don't want to have to go outdoors to get them. My home is their home. I use AeroGarden 3-hole planters as lamps as well as flower pots.

THREE: The most common reason for people to fail in gardening is over watering or underwatering. You cannot over water or underwater hydro babies because they live in water. Case closed.

FOUR: No bugs. Of course, that is not strictly correct because once in a while aphids or white flies will get into the house, especially if plants from outside are brought in which are already infected or if the indoor plants are so awfully neglected that they attract them on their own. I am thinking of someone who have 5 or 6 Aerogarden Deluxe (7-hole) planters set up in his garage and he accidentally left the door open a crack one night and the moths got in and decimated them. Those computerized planters have very bright lights.

FIVE: No dirt. No weeds. Did I say I don't like dirt? That is another reason I am not a dirt gardener. I don't like pulling weeds, or bending over (unless I'm doing yoga and that is different), and I don't like dirt. Salad greens grow to harvest in 30 to 45 days and don't have to be picked over for insects or even washed before eating. Seeing them indoors also helps me remember to eat them!

SIX: Too hot? Too cold, too wet? Is it raining? No problem, I can still enjoy my hydroponic plants. Is it 110 F outside? They won't die because they are inside with me. Once I did leave some vincas out on the porch in August in Arizona on one of those days where you can cook an egg on the sidewalk, and the liquid nutrient solution got so hot their little roots burned. Poor little roots. They died. I lived and learned.

SEVEN: Foot fetish. It is a thing with me. I like to see the roots of plants. Many, many varieties can be reproduced from stem cuttings by simply sticking them in water and waiting until the roots form. Soon after, tiny new leaves appear and start to open up and before you know it there is a new plant. It is free, too. This used to be easier before all the new copyrighted plant hybrids came into existence, but most plants still can be cloned at home without a fee to the original growers as long as you are doing it for personal use and not turning around and selling the new plants. In future I will write some tutorials on rooting plants from cuttings.

EIGHT: Plants as pets. Last, but not least I like hydroponic plants because they are like the teddy bears of the plant kingdom. They are my pets, but I don't have to take them for a walk or give them shots, or God forbid, interfere with their breeding. There is an exception to every rule, so for some plants to produce fruit I do have to interfere a bit by hand pollinating the blossoms. That is not a hard thing to do. Pepper plants, for example, wind pollinate, so all I have to do is gently shake the branches every couple of days for a week or so when they are in bloom.

I could give you a lot more reasons why I like hydroponic gardening, but Sandra only asked for eight and some of you are probably falling asleep already. So that is it for now, but unless somebody stops me I will probably post a lot more articles about plants in water.

Image Credit » Samsung Note3 is my camera for this, my picture.

Despite knowing so much about this method I have still not got into it but this post is tempting me wholesale :). I am serious about it. Wish me luck!

That is something I've never tried. It does look fairly simple and I really like the idea of no bugs.

Even if it is just a glass or two of herbs growing in water on your windowsill, there is no reason to not have a few plants. No brown thumb excuses with water babies bestwriter

Nothing could be easier than to cut off the tip of a stem and bring it in and root a plant in water SLGarcia . Then you can watch a new life created.

You have not talked of nutrients. You must be putting some. Right?

LOL...I like your reasons and you've tempted me to want to do it. I have so many houseplants and they are all going to need transplanting here soon. This may be a good winter for me to try this, some extra greenery in the winter always reminds me it will end.

In my view lynnwrites the best part of winter is the end!

Nutes are needed after the first week or two and anything will work. I particularly like General Hydroponics Flora Series, but I have also used the inexpensive Shultz Liquid which retails for under $3. A few drops will last about 2 weeks.

Any success with vegetables. I understand tomatoes yield well with this method.

These are BRILLIANT and OMGosh so much for the learning :) YAY :) I will set about getting these on "Your Top 8" but I think I may wait until later in the week. There's a reason for that - oh heck, I'll tell you. I just added two from others and I don't want you to get lost in the mix. Let them enjoy their time and let's wait until Friday to add you. I'll make a note so I don't forget :) Thank you so much for participating :) This is just darn wicked cool :) I have a brown thumb but good gosh, I bet even I could do some hydro growin' :) for many of these reasons you listed above!

Thanks for the major nurturing sandralynn and don't worry a bit about when or if you get around to adding me to the mix. It was fun! I hope you do stick some stuff in water and watch it grow! There is no such thing as a brown thumb when you only stick it in nice clean water! It is that dirt that will get you every time

Very good and easy with tomatoes and peppers, but I have also grown peas, beans, eggplant, cucumbers and more with just water and liquid nutrients. Fruits and flowers, too.

I've never seriously looked into hydroponic gardening, but having read your eight reasons for why you enjoy it, it's something I might consider down the road. Your enthusiasm for this method of gardening is apparent. Might you consider an informational series of posts at some point, giving others the benefit of your experience, as to how to go about the various processes? I think it would be a winner here and I know I would enjoy the information as well as passing it forward to my gardening enthusiasts on Pinterest.

Yes, absolutely, Feisty56 as that was sort of one of my intentions for signing up here. Glad to think that someone might be interested. Thanks.

You make it sound so easy that even I could almost do it!

I'm glad to hear it! I'll be looking forward to those posts.

You can do it oldroadsoncetraveled Anyone can, as it is not rocket science.

You've been added to Your Top 8 and I hope to have done you proud. Thank you so much again for participating :) Anytime you'd like to throw a list of eight anything, feel free :) Great addition, truly :)

Yikes, I tried to html the link but it didn't take ;) here it is: http://informedsharing.com/your-top-8/ :)

You done me proud! Thanks much, I truly love it. I hope you are feeling all 100% better, too, Sandra ( sandralynn )

Oh, and by the way, I have another one for you, sandraLynn called My 8 Favorite Seasonings. I hope you like it.

I am going to learn more about this. I guess one MUST buy a certain light?

You can grow things in water without any special equipment at all, but for best results some kind of extra light is needed. It does not necessarily have to be a special light. I grow a lot of plants on a window ledge without any artificial light at all.