Sunbites Review: Corn on the Cob in a Minute 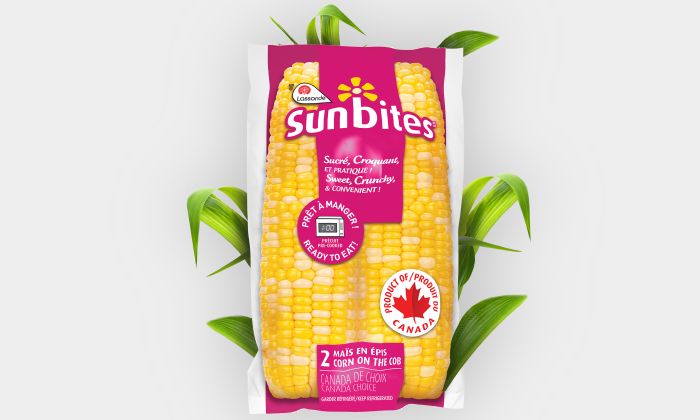 Corn on the cob is a favourite with our family, but it's a treat that we're generally only able to enjoy over the space of a few weeks near the end of summer. And then we have to wait close to a year to have it again.

This week our family discovered a new product that will allow us to enjoy corn on the cob throughout the year: Sunbites pre-cooked corn.

Sunbites is Canadian-grown peaches and cream corn, pre-cooked and vacuum packed on the day it's picked. Each cob is individually packed in a plastic sleeve, and you can buy the corn in a single or double pack.

The corn can be microwaved in roughly one minute, or cooked on the stove top or barbecue in about five minutes. It remains fresh as long as it is kept refrigerated, for several months. And it is available in Canadian stores throughout the year.

Sunbites corn is a cob about six inches long, evenly formed, with nice plump kernels throughout. We found no blemishes or underdeveloped kernels. The corn is vacuum packed immediately after pre-cooking, and has no chemical additives or other ingredients. It looks just like a regular cob of corn, except that it's been husked and pre-cooked before it was sold.

We chose to microwave the corn, which involved removing the outer packaging and poking holes in the inner sleeve to allow steam to escape. My husband cooked the two cobs together, which according to the directions required about two minutes on high.

After two minutes they were warm, but he wanted them hotter. He added another two minutes to the cooking time, at which point the corn was piping hot. In retrospect I think I would have tested the corn for doneness after an additional minute, as the sugars in the corn were a tad bit more caramelized than I would have liked. This is, of course, due to the fact that microwaves all cook differently. Cooking Sunbites in the microwave requires a bit of tweaking to determine exact cooking times.

The corn was sweet and juicy, and tasted for all the world like we had cooked it fresh. Had I not seen the packaging and watched my husband prepare it, I would never have known the corn was a convenience food. The only really big difference is that each cob is plump, uniform, and about as close to perfect as you could ask for. It's been a very long while since I could say the same for corn we bought fresh on the cob at a store or roadside stand.

I appreciated the fact Sunbites corn was so easy to purchase and so fast to prepare. It would be a quick addition to a family supper even on a busy night, and a simple replacement for a much less healthy snack food. I could easily add it to my kids' lunchboxes , knowing that all they need is access to the lunchroom microwave in order to have a full serving of cooked vegetables that they can eat with their hands.

Sunbites corn was first released in November 2013, and is making its way onto the market across the country. At present the product is carried by IGA stores, which operate primarily in Quebec and the prairie provinces. The product has also been launched in British Columbia. We found it here at the 7-Eleven store. Look for Sunbites in the refrigerated produce section.

The parent company of Sunbites, Lassonde, is headquartered in Montreal's South Shore region. The corn is grown primarily in Quebec's Montérégie, and is packaged in the Montreal area the same day it is picked. Lassonde also manufactures a number of fruit juices , including Rougemont, Allen's, Oasis and Fairlee products.

Our Sunbites corn was sold in single packs at the price of a dollar each. This is slightly more than fresh corn on the cob, but not so much that the product becomes a luxury item. The promise of a perfect ear of corn every time, without spoilage or damaged parts, is worth paying a little extra for. And the fact that we can enjoy Canadian-grown corn on the cob in the middle of winter is a great treat!

I wouldn't replace other frozen or canned corn products with Sunbites corn on the cob, but I would definitely buy this product again. I look at it as a convenience food but certainly one of the healthier ones, like fresh salad greens in a bag .


Image credit: Sunbites corn in a two-pack, courtesy of the company's media kit

Disclosure: The writer has no relationship with Sunbites or its parent company Lassonde. A member of the writer's family works for a company that distributes the product, but has not in any way been compensated for sampling the product. All opinions are based on in-home sampling of a product which was purchased by the writer.

Note about links: All boldface links in this review lead to additional content on related topics, written by me

You've gone and made me wish I lived in Canada! We are fortunate to have a farm nearby that people come to from all areas to buy the fresh sweet corn, but in the winter...

Is this the same type they sell at the side of the road...if so, I have partaken of this Canadian delicacy...lol

Looks delicious. I miss corn on the cob, since Hubby isn't supposed to have corn anymore, and it seems cruel to eat it in front of him.

I am impressed both with your article and the product. I can almost taste how good it is. We have gotten some excellent fresh sweet corn lately, but I have noticed that it has been very hard to de-silk.