I'm So Sick of Ants! 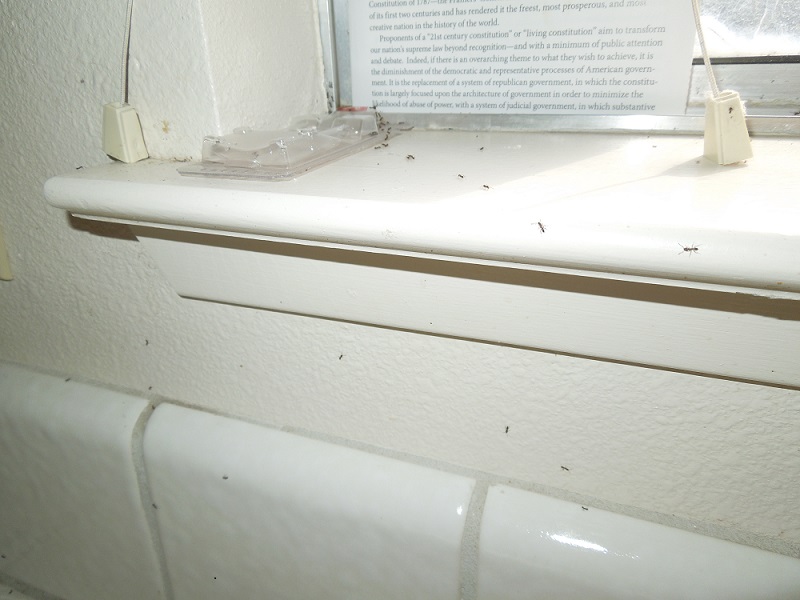 The ants began their invasion about the time I was able to hobble around again after my foot surgery, in May. Their first attack came in the master bathroom – the one I was using, of course. It took about three weeks and four ant traps to diminish their number to a few stragglers. I sighed with relief and went back to life as normal.

A few days later they invaded the hall bathroom. I am on my second ant trap there. They seem to disappear and then they are back again. I knew the next invasion was inevitable. It finally happened about two weeks ago.

They struck the kitchen, where I hate them most. That's where I took the photo at the top. ( Right click and choose open image in new tab from the drop-down menu to expand the photo. ) I figured if I put the poison in the window where they appeared to be coming from, I would not have to put any traps on the counters. The bait in the first trap disappeared right away. It seemed almost as if it had dried out. So I put the piece of paper in the window to try to shade the area.

The principle behind the traps is that the ants eat the poison and go home and kill off the colony. Evidently the ants haven't gotten the message. My husband says it's because they haven't read the directions. In the master bathroom they simply ate the poison and wandered all over the rest of the bathroom to drop dead, leaving the floor looking as though it had rained ants.

In the second bathroom and the kitchen, they don't do that. They never really stop coming. I have two traps there now, and although there aren't hordes of them, I'm not ant-free there. Just when I think I am, more arrive.

I found more ants in the master bath yesterday, this time focused on the bandage cupboard.Why there? Who knows? I couldn't find their path to or from the cupboard. I put another type of trap there, and they seem to have left again, for now at least.

They are driving me crazy in the kitchen. I brush them off the counters with a dish rag when I have to prepare food. I have three traps there now – two on the window sill and one behind the toaster. It appears I'll have to find a place to put the fourth one. Meanwhile, food preparation is a challenge. I'm using the bait that has always worked best for me with this type of ant. I'm beginning to wonder if it's time to call in an exterminator. An ant just walked across my computer desk, beside my monitor. Probably rode in on my arm from the kitchen.

This house has always been an ant target. My mother fought with them every year here. She actually had an exterminator one year and then stopped the service after the ants had been gone a few weeks. When the ants came back she thought maybe the exterminator had planted them so that she'd call them again, but she didn't. I can't find the trails leading inside the house from the outside perimeter of the house or I'd attack them there.

I'm getting desperate. Does anyone have some suggestions? They love tansy, which is supposed to repel them. What has worked for you?

Meet Another of my Friends Who Just Joined Us

Wow! We have nothing like that in the Scotland. I can't imagine a plague of ants like you describe. We do (not us but some of my friends) get the occasional ant or wood louse coming into our homes but not in the numbers you are having to cope with.

I've only had the carpenter ants. They were inside the wall of the house and we had to get an exterminator.

When its humid or rainy outside, they will come indoors. There is really not much you can do about the ants. Remember, they are a part of mother nature.

I have been fortunate not to have had to deal with ants in the house like this (and crossing my fingers that I never will), so I'm afraid I'm not a bit of help. I'm thinking an exterminator might be a good call at this point.

I've heard pangolins are good at getting rid of ants...Chances are if you can't find a nest in the garden then they have made a nest in or under the house itself...check for cracks outside. Pouring water in those cracks will often see them carrying out eggs in an attempt to re-locate..Once you have located a nest you can treat it with antkiller or boiling water...

You are fortunate, my friend.

Mine aren't as large as carpenter ants.

Nature is supposed to stay outside where it belongs. It is hot and dry outside.

I'm putting new traps out today and hoping. If it doesn't get better soon, I'll have to call in the professionals.

I"m not likely to find a pangolin around here, but it wouldn't starve. There are ant nests in the garden, but I'm guessing there are also some within the house structure, or under it.

I know how you feel. I am used to seeing ants though. There could be worse insects in the house.

On the outside of the windows they gain entry, spray a solid line of WD-40. They hate petroleum products and WD-40 tends to stick around awhile. If you know where their bed is, someone else taught me to dump my old coffeegrounds on their bed. The caffeine in it (which, while present in plants like the coffee tree is a natural insecticide) drives them nuts and they'll move.

If you go the WD-40 route, make it a complete line all the way around the window, or else they'll just go around it.

Also, a broad border of diatomaceous earth will stave them off, since it's actually tiny little shards of bone. It's like walking across a field of broken glass on their scale. :)

They don't appear to be coming in through the outside of the window.

Where is the best place to buy that?

It is the little tiny ones that are most tenacious around here. I have had to break down and use Home Defense by Ortho, which I bought at Lowe's Hardware. When they got into the refrigerator they went right into the freezer and froze to death by the thousands. I went outside and sprayed the cracks I saw them going in. Since I move from one place to another seasonally, I spray the outside perimeters of each place after we've packed the vehicle and are about ready to take off. But inside the houses, since we don't have pets I sprinkle borax around all of the baseboards and vacuum it up when I get back. Borax works really well against ants and cockroaches both. If it doesn't keep the ants away by itself there are lots of recipes online for home made ant bait traps using Borax and honey or sugar. They eat the bait and carry it back to their next where it kills them all. It only takes a little borax so you can use the rest in the laundry. What fun.

I get a few ants in the house occasionally, but nothing bad. Outside is a different matter.

Guess I'd better buy some borax. We've got lots of honey. Thanks

I don't worry so much about the ones outside, unless they are on my veggies.